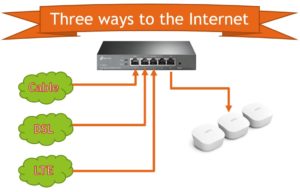 For us, the most critical part of working from home during the Coronavirus era is having a rock-solid continuous Internet connection. In another post we talked about our LTE cellular hotspot failover setup, but our LTE was having trouble handling our load during long outages. We decided to get DSL as well. The problem was getting a cost-effective way for the three ISPs to fail over automatically. We tried looking for failover and redundant internet, but finally discovered “Multi-WAN.”

Cable Internet runs on coax; it is fast, but goes out for hours without warning. DSL runs on copper pair and is more reliable (for us). LTE connects to the cellular network by radio, it’s not quite as fast and it’s a metered connection which can quickly get expensive.

For traditional ISP failover, at first we could only find dd-wrt hacks and Cisco enterprise boxes in the $400 range. We were writing a feature request to eero (since their mesh routers already detect an ISP on one of the connections and detecting more than one might be easy) and did some more research. We found out that the phrase to use is “Multi-WAN” and that pointed us to a unit under $40 from TP-Link that not only does failover but also does multiplexing, and you can set it up with your web browser.

We use failover to detect when a preferred connection is broken and automatically switch to a backup, e.g. from cable to LTE. It’s like switching to surface streets if the freeway is closed.

There is another configuration called multiplexing that lets us combine the connections, like a multi-lane freeway.

There is a surpisingly good manual that lists all the different connections you can set up and how to configure them, and it wound up being pretty easy for my setup.

I wound up setting my cable as my primary, DSL when that goes out, and LTE when both fail.

Failover requires a heartbeat to confirm the connection. with pings to the Google time service every 15 seconds as my heartbeat.

I did not configure DDNS, Dynamic DNS, the feature that pings out to a nameserver so the Internet can find your changing IP address, like if you’re running a NAS or web site from your home.

I might try multiplexing the cable and DSL connections.

So far this has been really really great for us. I’ve pulled out the plug to the cable while we are watching a movie, and it almost magically keeps on running without skipping a frame. It takes a couple minutes to reactivate the cable, which seems like a sensible default – I’m sure it’s something I can configure separately. Most important, I can get a $25/month limited DSL connection as backup and only use it when I have to.

Update: I discovered a newer faster version of the switch but it’s more expensive. I’ll hotlink an Amazon frame so you can see the current price:

You can send us an email. Send it to us@bigbrainsr.us and mention “Big Brains” in the subject.

We participate in the Amazon Associates Program, an affiliate marketing program that pays us a small commission from products purchased using links on this site.